It really has been a long time since I posted...and in my last post (back in 2019) I had all intentions to start creating and blogging, but life caught up with me. But, as I'm on break for the next few weeks, the plan is to start again...so much has happened, I have a new craft space (I call my studio), have it pretty well organised with new storage and work area...so there is now no excuse.

As today is Easter Sunday, I don't plan to upload anything, but I promise to be back on this Wednesday to share some of what I've done these past 6 months.

Thank you to those of you who are still following me, even though I've been silent. The plan is to be silent no more.

Wishing you all a very Happy and relaxing Easter break!

Posted by Hardwick Creations at Sunday, April 04, 2021 No comments:

OMG...I've been in the creative wilderness for some time now, but have finally got my mojo back. It helps being on long-service leave too. I have gone back to doing ATC classes with the sensational Kelsey O'Mullane...it feels so good. I will post some of the ATCs I've created in the past 6 weeks or so.

Cheers,
Alessandra
Posted by Hardwick Creations at Tuesday, May 28, 2019 No comments:

I'm back from the wildernesses!

Where do I start, it has been about 3 years since I last blogged...in that time I've move house, bought a house, visited family in the US, changed jobs, and have had a significant birthday.

I don't have any pictures to post just yet of any new projects, but I will soon, so watch this space.

I'm going to attempt WOYWW again, but we'll just have to see. I'm excited, I have a few pokers in a the fire...and am on fire a bit myself...figuratively and literally 😋
Enjoy your day...and until next time (not so long next time)...bye ;D
Hello there
Posted by Hardwick Creations at Saturday, November 12, 2016 No comments:

WOYWW A lot has happened in the past 9 months!!!

A lot has happened in Casa Hardwick since my last post in January 2013. Namely I've started back at full-time work, we sold our house, we moved into a rental, we bought a house and we moved in about 4 weeks ago.

Needless to say, not much crafting has happened in this time since all my craft goodies had been packed away and I've only just unpacked everything (but I'm still trying to get my new studio set up).  I no longer have a little studio outside but now I'm under the main roof which means I won't feel the cold so much!!!

So at this stage I don't really have much to report save to say I'm hopefully back on deck!

Here is a picture of my new digs and a couple of the most recent ATCs I've created for the PaperArts group of which I'm a member. (unfortunately my camera battery died and I haven't found my chargers just yet) 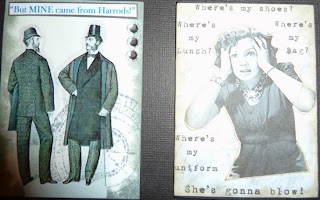 I will endeavour to check out some of your blogs, and hopefully some of you will be back to visit min again.

I promise to be a little more regular now that I'm almost back to full speed again. Don't forget to visit Julia's blog where she showcases other artists work.  Enjoy your day and until next time.  ;D

WOYWW...The holidays are over! Back to work I go!!!

I have enjoyed a very relaxing (but also very busy) 5 weeks and am re-energised for the new academic year.  These 5 weeks have seen Christmas come and go, a year end and another one begin, friends from interstate coming to visit and stay and the past week and a bit I've managed to do some crafting too.

I've managed to get a number of projects finished as well as starting on some new ones.

In my last blog I spoke about a Mixed Media swap I'm involved in and, even though I posted a picture of the finished product as an amendment to that blog, I've decided to post the picture again.  It is 8" x 10" and is on a flat canvas.  The brief was to create something in Black and White with a splash of Red.

I used black and white gesso, white modelling paste as well as textured paper that I ripped and painted over.  I also added a beautiful Pre-Raphaelite image.  I used copic pens to add the splash of red.

I wish I made 2, one for me and one to swap...but alas I didn't and I will just have to be brave and part with it.  At least I have the photos.


Here are some of the other projects I spent time on during the week. (most still need embellishments) 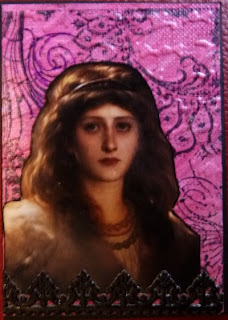 My granddaughter Isabelle and I spent time together yesterday, cooking pancakes and doing craft and this is what we did...(she is really camera shy, so I had to take this one sneaky peaks...still a nice photo). 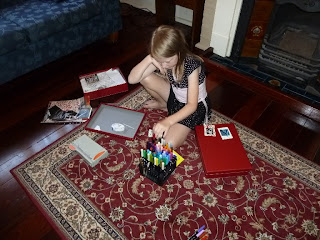 Firstly I'll showcase Isabelle's efforts, some of these are for me, some for my husband and some for her mum. 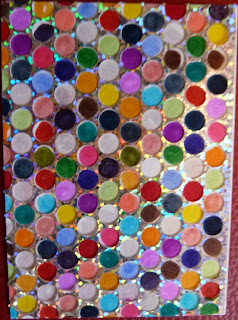 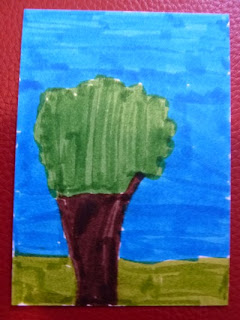 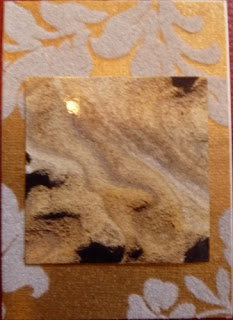 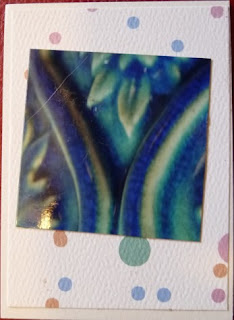 And these are my effort...as I said...I still need to add embellishments. 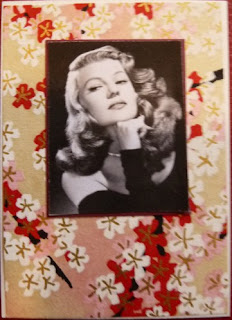 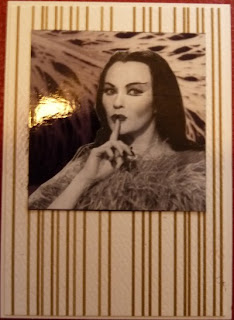 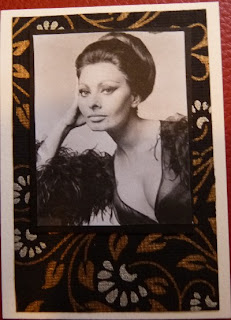 Thanks for stopping by...don't forget to visit Julia's blog where she showcases many other crafty people's work.  Enjoy your day...and until next time, ;D.
Posted by Hardwick Creations at Wednesday, January 30, 2013 25 comments:

Hi,
I don't usually refer to myself in the 3rd person but in this situation it is appropriate.  Since my big long creative hiatis I've been creating like a banshi.  Unfortunately, I have no photo of my workspace as I am currently sharing it with my husband, so there are paint tins, brushes, lawn mowers and exercise weights in our shared space. I do have some photos of the projects under construction...so to speak. Don't forget to pop by Julia's blog and see all the other wonderful crafters' blogs out there.

Well, here is a Zentangle background (only my 2nd Zentangle, ever) 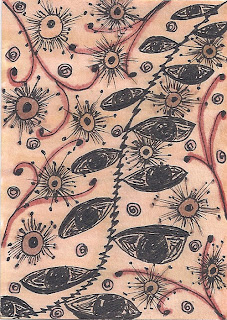 This is an ATC I just finished 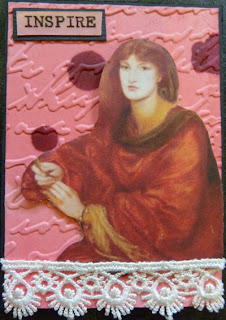 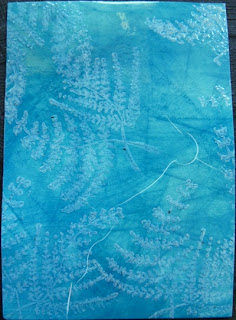 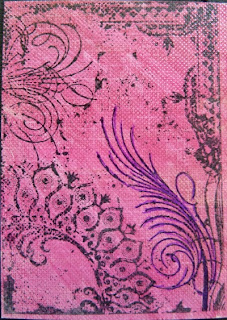 And finally...I'm working on a 8 x 10 canvas mixed media project. The theme is black, white and a splash of red...as you can see, I'm only at the black stage (though I did have white and red, but it looked a bit blah, so I painted over the top in black)...if it good enough for the masters...it's good enough for me...lol. 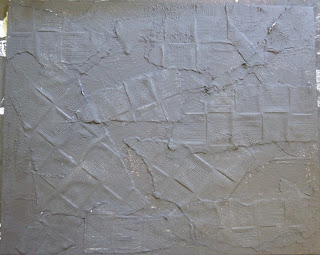 Well, that's it for now...thanks for stopping by.  Next entry will hopefully show the transformation of the images above.

PS, if you haven't checked out my blog from last week have a look as I am offering a prize to the first person to spot the problem. (post your answer on last week's post)

I will announce the winner of the ATC next week...I won't be publishing any of your comments (should you put the answer there so as to give people a chance to work it out)

After just 3 days and lots of comments (which until how have remained hidden), I've decided to announce who has won one of my ATCs for picking up on what was incomplete on last week's zentangle post. The 5th zentangle (row 2 1st left) is the one.  I forgot to finish off the diagonal pattern on the left hand side of the lady's hair before taking the photo.

The winner is...RosC!!! Congratulations Ros, just email me your address and I'll pop one into the post. Thanks to all of you who left a comment...I now will publish all the comments.

PSS  Remember that Mixed Media Black and White with a splash of Red canvas...well, I've finally finished (well, at least I think I am)...this is the finished product:


Let me know what you think...Should I add anything else or is it good enough as is?
Posted by Hardwick Creations at Wednesday, January 23, 2013 41 comments:

WOYWW (well I'm actually a day late) My mojo is finally coming back!!

Hi, I feel like I'm finally back from a deep black hole. As you can see from my previous post it has been some months since I last was here...2012 was a difficult year, but I'm sure 2013 will be a blast!

Today is the first time in 6 months that I've actually had the desire and the energy to create some art.  I've entered a swap in one of the groups I was heavily involved with in the past.  The brief was to create a Zentangle...a what I hear some of you say?  Well I'll add a link showing you some that others have made, but here is my attempt. I'm quite pleased with them.  Especially when each one is done individually with only the central face image being a stamped image. 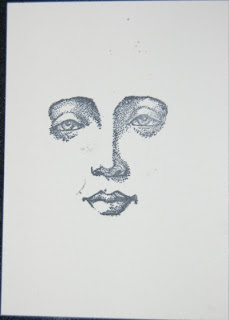 One of the 7 created 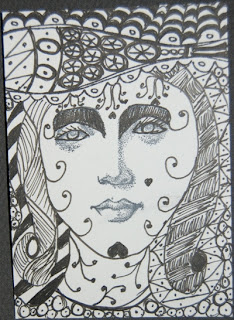 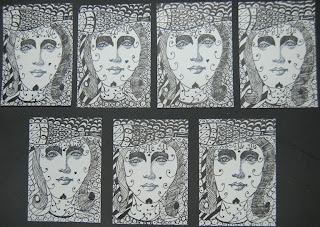 Other Zentangles you might want to check out (by various other artists)
Well, that's it for now...thanks for stopping by to have a look and hopefully I'll be able to make regular contributions as in the past.

PS...I realised after I uploaded the images that they weren't all spot on.  I will send one of my ATCs to the first person to let me know what they think the problem is...start looking and good luck!
Posted by Hardwick Creations at Thursday, January 17, 2013 34 comments:

Hardwick Creations
I'm a stamper from way back and I've dabbled in all sorts of art forms. I love mixed media art forms and am currently into Artist Trading Cards (ATCs). I have made and sold greeting cards, floral art works just to mention a few. I'm a Secondary teacher and I love travelling. I'm married, have 2 "furry four-legged" children, 2 step-daughters and 2 grand children.

Time in my part of the world

Where the heck are we?